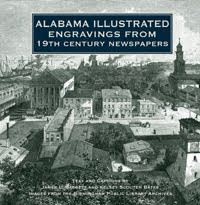 Turner Publishing has released another amazing book, and they've sent me a copy to give away to one of you!! It is called Alabama Illustrated Engravings from 19th Century Newspapers.

This book walks through a fascinating period of history where there was no Twitter, Internet, 24 Hour News Channels, or even a way to economically publish photographs to get the news out to the public. So as an alternative, publishers employed artists to draw and engrave images of places, events and people.

This practice was prevalent from the 1850's to the 1890's, and there were little more than 250 of these images published of events and people in Alabama. This book is a compilation of the most captivating and detailed images of Alabama that were published.

But they don't just provide the images - they have background information and stories to go with each one, and the combination provides a riveting relay of Alabama history during that time period.

I was immediately sucked in, reading about such events as a jousting tournament that happened at the Annual fair, the inauguration of the Confederate President Jefferson Davis, many engravings and gripping stories about the Civil War, and images from the early industrial days of Birmingham.

If you want more information on this book, the Authors, James L Baggett and Kelsey Scouten Bates, will be in Birmingham doing two book signings and speaking engagements - August 29th from 1-3pm at Barnes and Noble at the Summit, and August 31st from 4-6pm at The Alabama Booksmith!

If you would like to be entered to win a copy of this book, simply comment on this post. The contest is open until Monday, September 7th, and a winner will be randomly drawn and announced on Tuesday, September 8th.
Posted by Rachel at 6:00 AM

I would *LOVE* to have a copy of that. How fascinating!

Thanks for the heads-up on the book :)

Looks like a great book to add to a home library. Thanks for the suggestion.

I love books about Alabama! I'd love to win this one!!!

I am obsessed with books about Alabama, and Alabama history to boot. Would love to have a free copy, but I will definitely buy it if I do not win!

Oooh! I am SO thinking that this would make an excellent Christmas gift for the Florida-raised, Alabama history obsessed hubby. Not to mention, it would be cool show and tell for the 4th grade daughter in her Alabama History class.

I love books like this that tell the story in pictures! (Some of us never grow out of the need for picture books, I guess.)

Thank you for the opportunity :)

Oh! Enter me, please. Thanks for the opportunity!

Love history books like this! Thanks for the chance to win it!

I'd love to have the book!

This book looks fantastic and would be a great teaching guide for 4th Graders studying Alabama History. Thanks for introducing us to this book!

This looks like an incredible book that I would learn a lot from!
Thank you for the giveaway :)
hurdler4eva(at)gmail(dot)com

this interests me since i live in alabama.

i love to read mverno@roadrunner.com

would love to look at the beautiful pics and read it

I would love to win this book. garrettsambo@aol.com

I wanna be in
Jaleigh78[at]aol[dot]com

This looks great, it would be nice to browse through this

I love these kind of books, thanks for the chance!

My brother lived in Alabama for a few years and I would LOVE to win this for him...I think he would really like it!
sweetpea84074@hotmail.com

Used to live in Alabama. My dad would enjoy this book.

I would love such a neat and fascinating book.

Sounds like a great and interesting book. Count me in.

This looks really cool! Thanks for the chance!!
hawkgirl_16{at}hotmail{dot}com

would love to win, this looks great

My family been living in Alabama for 5 generations. I love all things that are Alabama.

I love the South and would really enjoy this. Thank you!

I live in Alabama and would love to have this book!! Thank you!

I would love to win this great book. I love Southern history. garrettsambo@aol.com