Hello Everyone,
Christopher has a little different way of telling us about his hometown. I know your going to enjoy it. ~ Valerie

I’ve spent countless hours “looking” at Athens, Alabama. Although I grew up in Elkmont, eight miles north, many people from “the County”, like me, share a sense of attachment to our county seat. Yet for most of my thirty-four years I only saw the visceral parts of Athens. There are always the ubiquitous parts of a town with which people identify, and as a teen the local shopping centers defined Athens. Although I loved Rose’s, I was unimpressed and, like so many others, left for a university swearing loudly never to return anywhere near here. But as I spent time on the Plains, I increasingly longed for more time on my grandparent’s farm. After teaching for one year in South Alabama I came home for good.

I married an Athens girl in 2002, and we spent one year in a nearby sterile, very vanilla city. With my wife commuting to Moulton for work and me teaching at Sparkman High School, Athens and Decatur emerged as likely places to live. Decatur initially had an early edge in that we hoped for a home in an established, traditional neighborhood. So many friends from college graduated and settled in great older homes in Birmingham, Nashville, and Mobile. After looking at what seemed at the time at every house in North Alabama, we found one on South Houston Street. It had a great corner lot with beautiful flowers, was near Downtown, and was built in 1945. Better yet it was in our budget and, like so many fixer-uppers, it had great bones.

A few years ago I started running again, primarily to slow that inevitable physical decline that seems to increase when you turn thirty. Although running is a cathartic experience from the stresses of teaching, it has become something more for me. It affords me the unique opportunity to experience Athens from a perspective that is seemingly lost to many as families flock to subdivisions on the town’s periphery. I drive home, not only looking forward to the endorphin rush of running, but because I am increasingly aware that with every trip around the Downtown that I am becoming a part of the place. Courthouse squares of the South offer substantive interpretations of the values and history of small towns. They occupy a place in people’s minds as a part of the vernacular of the South. Like so many others, we have our statue to Confederate veterans poised, his stone face permanently staring defiantly to the North. 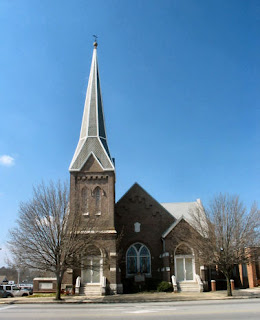 My church, First Presbyterian, sits on the corner, seamlessly stitched into the landscape of the place. Age old hemlocks tower beside the courthouse, soaring to the pediments with gnarled limbs that have drooped and sagged with time. Really, a downtown defines us; though oftentimes we are not aware that the place they occupy in our imagination is more whimsical fancy than reality. 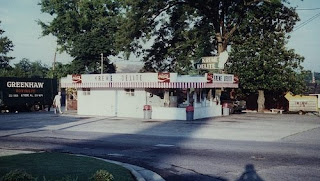 But on my runs, as I labor up the hill beside Kreme Delight and through our Downtown neighborhoods, Athens takes on an authenticity that I had never before realized. With every trip around the courthouse I am more conscious of being a part of the arch of time that exists in our town. I look forward to passing Hendricks and Patton Furniture and having Mr. Bucky wave at me as I jog past. Although many new developments and subdivisions attempt to recreate the experience of community, they cannot account for the sense of permanence of a traditional neighborhood within walking distance of local restaurants and shops.

Luckily our Downtown has experienced a revival of interest in the last few years, thanks in large part to the efforts of the Spirit of Athens and tourism director Jeannette Dunnavant. Village Pizza pulses with music as patrons anticipate great food in a setting that has an authenticity that a strip mall just doesn’t provide. U.G. White and Gray & Holt are like anchors, the granddaddies of the Downtown businesses. They provide an eternalness and nostalgia that every town square needs. But these businesses cannot exist by themselves as “the Downtown”; it is the traditional neighborhoods and their residents that define a place and Athens’s need attention. Once these areas decline, the ability for residents and city officials to turn them around and bring back in young, vibrant families is difficult.

My little girl, Avery, who is three, loves exploring my neighbor’s backyard. T.E.’s yard is different from ours; he has towering fig trees that Avery strips the fruit from, at least as far as she can reach, then I gather the rest for her after school snack. My wife loves our covered deck where she catches the cool breeze and a nap, until the train barrels through town. As for me the benefits of living in a traditional neighborhood are intangible and difficult to explain, at least to those who have not had the pleasure of doing so. But for those of you who grew up on Coleman Hill or in one of the historic districts, you know that it is special and that these areas are worth saving.

Thanks to Christopher for this great article that he sent to us. Also thanks to Trisha Black at The Spirit of Athens. Please be sure to visit her website. Other web sites that might interest you are Downtown Athens Alabama and The City of Athens Alabama.

If you would like to feature your hometown on Alabama Bloggers, please contact Rachel (rachel@alabamabloggers.com) or Valerie (valwonderfullife@aol.com) and let us know!
Posted by Rachel at 6:00 AM

Coleman Hill has a special place in my heart, and the hearts of all the Pattersons, Hetricks, Orrs, and so many others. I sincerely hope that the downtown rebirth moves toward our older neighborhoods. Growing up on Pryor Street, my neighbors were like extra grandparents. I learned so much from visiting with them in the afternoons, and they enjoyed watching a youngster playing in the yard. There is much to gain for a young family by moving into a house with "great bones" on an old city street and enjoying some of Athens has to offer.

I grew up in Athens (well the Clements area really) and am proud to say that it is somewhere that I love to bring my boys back to. Who says you can't go home?

What a great glimpse into the life of Athens "On the Square"! I, too, live in the Coleman Hill area, and it's been a wonderful place to live.
I'm lucky to be in J.W. Hudson's old home....and I'm still enjoying all the beautiful flowers he and his wife planted over the years. "For here the saying holds true, 'One sows and another reaps.'" (John 4:37) We inherit a wonderful history in this community in a thousand different ways--my favorite is found in the roses and azaleas!