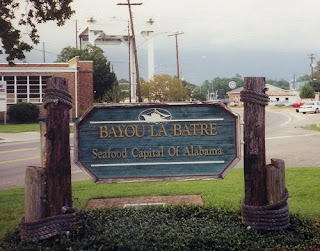 Today we are touring the hometown of Benjamin Buford "Bubba" Blue! For those of you who don’t know who he is you can refer to the movie or the book Forest Gump. Well, actually, Bubba was a fictional character but he hailed from the town of Bayou La Batre. Bayou La Batre is located in south Mobile County the city is described as the “Seafood Capital of Alabama”.

Not only was it featured in the movie Forrest Gump but Disney had a little undercover job here in 2005. It is here that Disney Studios had a pirate ship secretly built. I’ll give you the name of the ship – The Black Pearl. Can you guess what movie it was used for? I thought that was a fun little unknown (at least to me) fact.

Bayou La Batre is pronounced By'l - La - Bat – tree. A French settlement the bayou was originally named Riviere D’Erbane. The French maintained a battery of artillery on the west bank thus the name Bayou La Batre. It was founded in 1786 when Frenchman Joseph Bouzage was awarded a Spanish land grant and became a city in 1955. 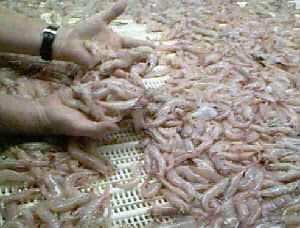 The reason it is known as the “Seafood Capital of Alabama” is because it is a leader in commercial fishing and the seafood industry. The estimate for commercial seafood is around $80 million a year. Bayou La Batre’s processing firm is highly regarded as the best in the nation. It is dependent for 85% of its income on the seafood industry. It is also a port that not only is home to smaller vessels but to large shrimp trawlers and every other vessel size in between. Shipbuilding is also a major industry. 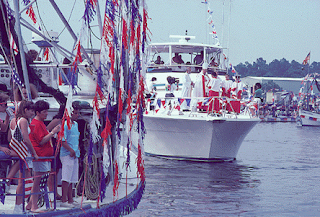 There are charter pleasure boats to accommodate any sportsman or angler fishing needs. Sports’ fishing is ideal in the warm and cooler months while shrimping is ideal year round, catching crabs are ideal in Summer and Fall. Fall and Winter are great months for oystering. The city holds "Blessing of the Fleet" and the "Miss Seafood Contest" in honor of their seafood industry. 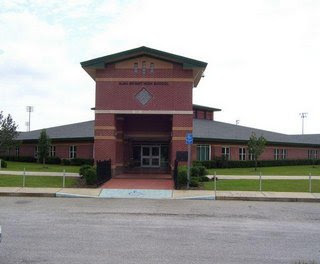 Bayou La Batre is part of the Mobile County Public School System. Peter F. Alba Elementary School K - 5th, Alba Middle School 6th – 8th and Alma Bryant High School. The middle school is known as the Sharks while the high school is the Hurricanes. You really need to check out the high school’s web site. They have curriculum from archery to oyster gardening!

In August of 2005 Bayou La Batre was hit by Hurricane Katrina. The damage the city incurred was devastating. The welcome sign at the beginning of this post is no longer there. Ships were washed ashore all over the port. Beautiful historical buildings were destroyed. They city is rebuilding but there are still remnants of Katrina devastation around town. Some wonder if it will ever get back to what it once was. With a lot of hard work the citizens are determined to reclaim the charm of their beautiful French village.

I have always wanted to go here! I am adding it to my must see next trip down!

I feel fortunate to have been curious enough to travel to Bayou La Batre before the hurricane devastation. It isn't on any "must see" list as a travel destination. I suppose it appeals to those who, like me, can appreciate the quaintness of a working shrimping village. That the movie "Forrest Gump" was based on the town was reason enough for me to make the detour after visiting Bellingrath Gardens. Thank you for sharing your "Hometown Tour" of Bayaou La Batre with Alabama Bloggers.

YAY! I lived there for a few years and graduated from that high school! Thank you for featuring this town on the blog :)

Anonymous said...
This comment has been removed by a blog administrator.
December 9, 2009 at 9:31 AM