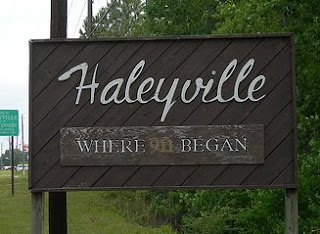 Today's tour takes us to North West Alabama to the town of Haleyville. It's about an hour and 45 minute drive from Birmingham. First known as Davis Cross-Roads, because it was the crossroads for the Illinois Central Railroad and Bylar Road, there is a neat story on how it's name was changed. Charles L. Haley came to town and opened his general mercantile store named Haley. It is said that Bucky Davis went into the store to purchase a suit and exchanged the price of the suit for the name. Thus in 1889 the town became Haleyville and the store's name was changed to Davis Crossings. 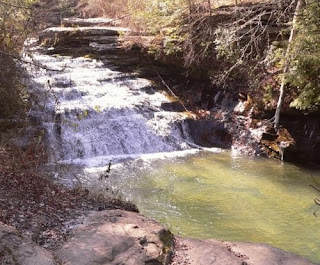 Although a small town, there are a lot of activities nearby to enjoy. Haleyville is just a short distance from Natural Bridge Park, William B. Bankhead National Forest and the beautiful Kinlock Falls. You and your family can enjoy the beautiful scenery while hiking or camping. Sipsey Picnic Grounds is a great place to spend an afternoon by the river. Also a short distance away is Loony's Tavern Amphitheater and Dismal Gardens. 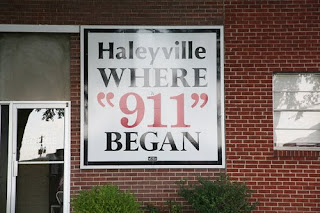 Haleyville is the Home of 911! The original red telephone used to make the first 911 call is housed at Haleyville City Hall. Resident Robert Fitzgerald designed the circuitry to make the call possible. On February 16, 1968 the first 911 call was made. Speaker of the House Rankin Fite placed the call from Haleyville City Hall to U.S. Rep. Tom Bevill. I guess you can say the rest is history. The second weekend in June Haleyville holds it's 911/Heritage Day Festival. This event attracts hundreds of visitors. Activities inlcude a parade, music, arts and crafts and in honor of the event emergency/rescue activities.

Haleyville City Schools include Haleyville High School home of the Lions, their school colors are Cardinal and White. Grades 7 - 12 are taught at the high school. The school system also includes Haleyville Elementary School (pictured above) and Haleyville Center of Technology. The Center of Technology prepares students for work. They offer classes including Computer Education, Family and Consumer Science, Welding, Agriscience, Drafting, Marketing Education, Computer Applications, Automotive Technology, Video Productions and Business Education. It is a great resource for the students of Haleyville.

Athletics play an important role in Haleyville. The 2007-2008 Baseball team was runner up in the AHSAA tournament. The 2008-2009 Baseball team won their first 4A State Championship. Their athletic talent also includes the 2008 Lady Lions Volleyball team which finished 3rd in the State Tournament. The 2008 Running Lions also finished 3rd in cross country. The boys Golf team has qualified for the state championship tournament in 2005, 2006, 2007 and 2008. Finishing 7th, 6th, 4th and another 6th place finish in 2008.

Like a lot of our towns in Alabama, Haleyville is home to several historical homes and buildings. To find out more about Haleyville, Alabama please visit their website Haleyville A Community of Excellence.

If you would like to feature your hometown on Alabama Bloggers, please contact Rachel (rachel@alabamabloggers.com) or Valerie (valwonderfullife@aol.com) and let us know!
Posted by Rachel at 8:57 AM

Thanks for the tour. I must visit Haleyville and check out that waterfall.

Isn't that where that great men's store, "The Clubhouse" (I think) is?