It's football season once again and our Crimson Tide did not disappoint! A friend of ours hosts most of the football parties ever year so we had our kickoff at his house once again. We grilled out, enjoyed some beverages (water for me, the pregnant lady), and watched our team dominate the Hokies! Of course, my husband was cheering for VT. He is always cheering for the opposing team. It is so nice that lately he has had little to cheer about! And it is looking like we are going to have another successful season!

The Tide got off to a somewhat slow start. I think there were five lead changes in the first half. The game was back and forth most of the night. Although we were winning and dominating possession of the ball for most of the game, I was worried that we were not coming out as strong as we should for the first game of the season ~ even if it was against the #7 ranked team in the nation (Tide fans are pretty demanding!). Then, it was like lightbulbs went off inside the entire team's head. Maybe it was just a pretty darn good half-time speech by Coach Saban. Either way, our boys were on fire - particularly in the 4th quarter, pulling out a 10-point victory in the end.

I was slacking in my photo journalism duties, so I only have two photos for you from the night:

some boys getting ready to display their manhood by grilling the burgers... 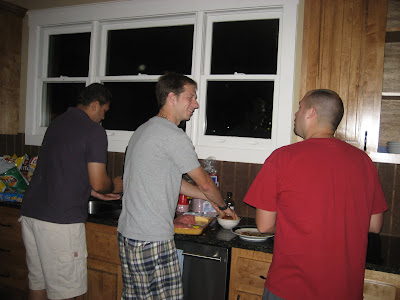 and a sweet shot of a VT fumble and Alabama recovery (which by the way should have led to a touchdown but only led to a field goal... we still have some work to do). 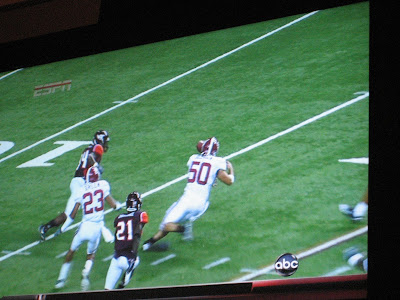 I promise to do better next week.... as I'll actually get to take some pictures live at the football game!!! Looking forward to a great home opener from The Tide!!!