The Best In Alabama: The Hamburger.

For a long time, I've wanted to start a series about the best food in Alabama.  Who has the best fries?  The best ranch dressing?  The best chocolate cake?  The idea was to post my own findings, let everyone weigh in their own favorite of that particular item, and if anyone had a specific category that they would like to feature, offer the opportunity for guest posts.

This idea came from the subject of this first post: the best hamburger in Alabama.  Because sometimes, the best discoveries are in the most unexpected places.

I didn't try this hamburger for years, despite my longtime dining habit at it's home.  Mainly because I'd never considered getting a burger there - after all, it was a place of Mediterranean delights - why would I get a hamburger?

But thank goodness for my husband, who is never afraid to try the hamburger anywhere.  From the second I laid eyes on his order (and most certainly after I'd swindled more than one bite from his plate), I knew I'd found the best hamburger in Alabama.

The Bifteki at Nabeel's Cafe and Market. 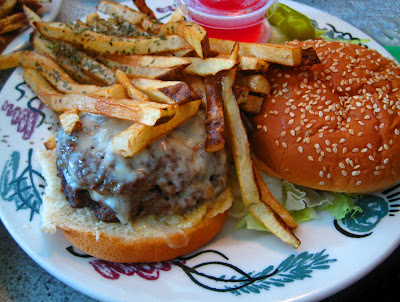 We first tried it a few years ago, and have probably eaten half the Biftekis that they've served in total since.

The Bifteki is special because it is most definitely a Greek Hamburger.  It isn't lamb, though - it's beef.  So don't get scared off if you're afraid to eat cute, furry things that say baaa.

The beef is seasoned with Greek oregano, stuffed with Feta cheese, and topped (and sided) with Kefalograviera cheese.

The combination is heavenly.

For garnishment you're provided the normal fixings - onions, tomatoes, and lettuce, and you are also rewarded with tzatziki sauce and greek dressing. 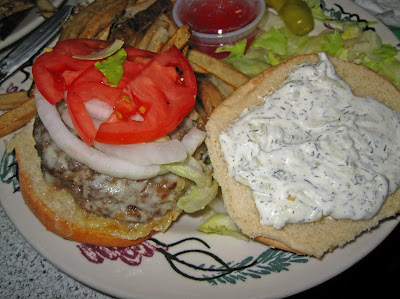 Here's the way to fix it right: add the vegetables that you want, then smear the bun with the entire offering of tzatziki.  I don't normally say this about a hamburger, but skip the ketchup entirely.  Put the burger together, then dip it into the Greek dressing before each bite.

Your mouth will thank you.


The richness of this burger is unspeakable.  The moistness added by having the feta inside the burger is hard to beat, and the offsetting tartness of the Greek dressing is phenomenal.  The fries are also outstanding, seasoned with Greek spices and cooked just right.  And they're also delicious when dipped in the Greek dressing.

What is your favorite hamburger?


Do you have a contribution to the Best in Alabama?  If you would like to guest post or make a suggestion for a place to visit, comment on the post, or email me at rachel@alabamabloggers.com.
Posted by Rachel at 5:07 PM

Wow. That sounds amazing. I sure wish I lived in Alabama!!! Now I know where to eat if I'm ever there!