Biscuits of Shame, A Review

Mama Hen at Long Days, Short Years is one of my favorite Alabama Bloggers. She writes about her family's everyday life in a down-to-earth, yet entertaining way. And, by the way, she is an authentic, wonderfully sweet Southern Woman.

She published a post not long ago that her husband wrote. It cracked me up and was the exact kind of "southern humor" that I want to feature here. So, after sending him a pot of beef stew or ten, he agreed to let me publish it here as well.
My Sweet Hubby is a true Renaissance Man. There isn't much he can't do. He can even do fractions with little or no effort. Anyhoo, he writes the best stories. He is a natural storyteller. He shared this with me the other day and I begged him to let me put it on the blog. After much begging and threats to not make anymore beef stew he agreed. Ya'll let him know if you have any special memories of your grandmother or mother like this.
Biscuits of shame, A Review, by Pappa Rooster

I am a connoisseur of biscuits.

The other day I had a person I formerly respected tell me that the best biscuits can be found at McDonalds. This offended me greatly until I realized that biscuit making has become a thing of the past in modern southern homes. Most southern homes today are southern in name only, most are filled with northerners, some of which were born in the south and then were consumed by northernisms. Most modern women make whomp biscuits. These are biscuits that come in a can and are whomped on the counter to open the can. Thinking of whomp biscuits makes me want to throw up. As Jerry Clower (a great American) once said “ in my neighborhood some mornings, it sounds like a small war going on with women making their families can biscuits in the morning”.
I have heretofore endeavored to give some history of biscuits in an effort to educate the lost south to the finer arts of the craft.

In the United Kingdom biscuits refer to a hard un-sweet cookie like baked good, of little or no taste. No wonder the pilgrims left, and it really is no wonder a bunch of farmers with pitchforks beat the British Empire like a rented mule; the British were improperly outfitted with some sort of European “biscuit”. These European biscuits are the reason that in all portraits of Napoleon he is always holding his stomach under his jacket. I also have it from a reliable source that stomach cramps were a major reason he was defeated at Waterloo. But I digress.

Fast food chains have it all wrong.
A good and decent biscuit must be made with love. The use of frozen dough is one of the things that is wrong with this country. Some of the fast food places make their biscuits from scratch, but you can't put love into a batch of 100 biscuits. I shall first critique several well-known biscuit selling establishments and then tell how a proper biscuit is to be made.

McDonalds – These biscuits are passable for fast food fare. But they are by far the greasiest tested. They are not fluffy enough for my taste and they each look pretty much like the next. If you like grease these biscuits are for you. If you are not a fan of grease pass on these. They will spackle any holes remaining in your arteries.

Chick-Fil-A – these are biscuits in name only. They are like eating a cotton ball. I don’t know for sure but they taste like a frozen biscuit. I bought two that tasted as if they did not finish cooking. I put them in my compost bin.

Burger King – I am not sure if they sell biscuits. There customer service is so poor that I always end up leaving before I am served. A coworker brought me some sort of biscuit-like contraption. It was a bacon, egg, and cheese on a miniature hamburger bun. Looked like something left over from cold war East Germany.

Jacks – Jacks sells biscuits all day. They are ranked best in show by the judge. The only problem is they fall apart. My theory is they need more hog lard.

The way a biscuit should be made is as followed. This should not be deviated from.
First you need an apron. Nothing with ribbon or bows and certainly nothing that says, “Kiss the cook” or “Over 40 and feeling frisky”. It should be hand made of cotton cloth. No fancy print, this is vital. No child should have to remember their mom making biscuits looking like they are about to run a marathon or play tennis, leave the exercise clothes in the closet and be real.
Now open a bin (not a bag) and sift flower onto the counter. This will prevent it from sticking.
Now take some flour and put it on your face. Then wipe some flour on your apron.
There needs to be at least two women in the kitchen, one Mom and one Grandmother.
They need to be talking about the next church social and the best recipe for banana pudding. A radio should be playing it should be set to a station that is playing the Prairie Home Companion, no music.
When a kid comes into the kitchen they should wear a dishtowel tucked into the neck of their shirt, and be instructed on the fine arts of using a rolling pin.
Then use real ingredients. Nothing ruins a biscuit more that straying from what works.

3 tablespoons of hog lard.
1 cup of sour milk (whole milk, none of that 1% 2% or skim stuff, live a little)-when I was a kid we used the milk straight from the cow.
2 ½ cups of flour
1 teaspoon salt
¼ teaspoon baking soda
1 tablespoon baking powder

Mix dry ingredients together; cut in lard or shortening.
Slowly blend in milk, just until dry ingredients are moistened.
Roll out on floured counter top to about 1/2-inch thick. (Do not roll too thin.)
Cut with biscuit cutter.
Place on un-greased baking sheet and bake at 350° 10 minutes or until golden brown.

At least that’s how I remember it.

When I was a kid my Grandmother and my mom would make biscuits together. I remember their conversations and the smells and sounds as if it were yesterday.
I would give a great deal to have them together again making biscuits. It was a time when the world was “all good”. When the most important thing was a good biscuit and the biggest problem I had was what to do with my afternoon.

Now go make some memories and some good biscuits. 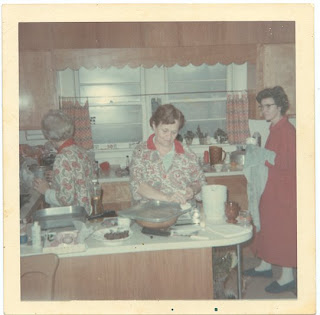 This is a picture of Pappa Roosters mom, grandmother, and Aunt Ruby cooking in the kitchen that I use today. Don't you just wish you could know what they were discussing that day? This picture makes me so thankful to live in this old house with all it's memories. It reminds me that everyday I am making memories with my children. ~ MamaHen
Posted by Rachel at 6:00 AM

I love that story. I'm from Texas originally and I sure remember my mother's aunts cooking like that. Thanks for sharing.

What a great story. I've tried to make biscuits like my Mama's but have never ended up with anything worth eating. Maybe I will try this and see what happens.

Amen to that! No body makes biscuits like momma. I have been on mine for a month to make me some. I havent had them in years. I dream about them.....
great story!

Oh I loved your story. I was born and lived in California until I was 13 when we moved to Alabama. As a child we would spend Summer's with my grandmother. I remember her and my great grandmother's biscuits, pies and cakes. Thanks so much for the bringing back my own memories.

Oh, Mama Hen, I love your husband's story! What a great piece; I made my hubby read it too! I don't know how I missed it earlier on your blog. Honestly, I refuse to buy those canned biscuits. I don't even use Bisquick. I make it from scratch, though my hubby swears the ones I make from The Farmhouse Cookbook are his favorite. They don't use hog lard though, but a mixture whipping cream and sour cream. Usually I make real butter and buttermilk ones, though.