Why I’m Not Boycotting BP.

It’s not even about all of the small business owners that are sure to get hurt more than BP by all of the boycotters. I do feel quite badly for them, but they’re not the reason I’ve chosen not to boycott, either.

My emotions tell me that I should absolutely take away my business from BP because BP is evil. BP has ruined our coastline for years to come. And, by all of their wording blunders actions, BP doesn’t really seem to care too much.

But the more I think about it, the more illogical a boycott becomes.

The thing is, we need BP. We need them to stay in business so that they can finish cleaning up what they messed up. And so that they can reimburse all of the untold numbers of people from which they’ve taken away their ability to continue their jobs.

The government would probably step in, which means we would all ultimately foot the bill.

But I doubt the government would be able to compensate all of the people with lost income due to the oil spill – no, we need BP around for that. We need the enormous corporate giant capable of making such a mess to continue in business so that they can fully fix what they’ve done.

And hopefully, our government will make sure that they do just that – and not leave us until every last tar ball is cleaned from our beaches and every last sheen is taken off of our oceans.

I certainly don’t have any false optimism that BP can truly right all that they have wronged – it would be impossible to replace the lives of animals lost, the damage to the sensitive ecosystems of our marshlands, and the health of all of those helping in the cleanup process, but we need them to be around to do the best that they can.

I will admit, though, I haven’t been able to bring myself emotionally to go to a BP station since the true depth of the oil crisis sunk in, but I intend to. Because I don’t want them to disappear. At least not until they finish cleaning up our precious world.

I DID find one way to get out some emotional frustration, though: I made a T-Shirt. 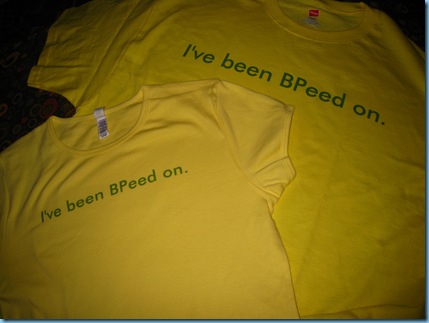 There’s just something so healing about a good T-Shirt…

I'd love to hear your opinions on this matter, also. Here is another article on al.com that argues that boycotts of BP stations would have very little impact on BP itself, but large impacts on the communities in which the service stations are in.
Posted by Rachel at 1:52 PM